Several strategies have been successful in protecting infants from hypernatremic dehydration while simultaneously protecting breastfeeding. The most effective programs modulate their intervention according to the level of weight loss.

The Impact of Birth Interventions and Hospital Routines

Tracking weight loss from the 24-hour weight (instead of birth weight) in infants born by cesarean in a Baby-Friendly hospital reduced supplementation without an increase in hypernatremic dehydration and rehospitalization (Deng & McLaren, 2018). In a retrospective chart review, infants who lost the most weight their first day (>4.5%) were 3.5 times more likely to lose >10% of birthweight during their hospitalization (Flaherman et al., 2015). Flaherman et al. (2013) caution against diminishing maternal confidence in breastfeeding when this occurs.

Commonly accepted values for normal newborn weight loss (7%) and problematic weight loss (10%) are based on a small number of data points per infant (DeMarzo et al., 1991). A systematic review by Noel-Weiss, Courant, and Woodend (2008) stresses that the weight loss data published up to that time were mainly median values derived from different populations with different methodologies. The great variability of individuals and environmental inputs makes it difficult to interpret any single infant’s weight changes. It would be like buying t-shirts for a large public event, and only ordering size medium: some participants will be stuck with a shirt that is too small, and others with one that is too large. Similarly, attending only to median values gets some infants too much intervention, and others not enough.

Nomograms are charts that help capture the time dimension and individual variations to help determine whether babies are progressing normally or are at risk. Several groups have produced nomograms that clinicians can use to help screen newborns (Table 1). van Dommelen and colleagues (van Dommelen, van Wouwe, Breuning-Boers, van Buuren, & Verkerk, 2007) used statistical analysis of weight changes in large cohorts of exclusively breastfed infants from day 2 through 11 to construct normal growth curves, and compared them to those from two groups of infants with hypernatremic dehydration. They were able to see that infants who developed HND had already lost significantly more weight than infants who did not long before showing symptoms. The group then produced a nomogram that predicts elevated risk of hypernatremic dehydration in the first week of life, so it can be prevented by breastfeeding assistance and stimulation of maternal milk production.

b Nadir data for Flaherman et al. (2015) are taken from the percentile charts. 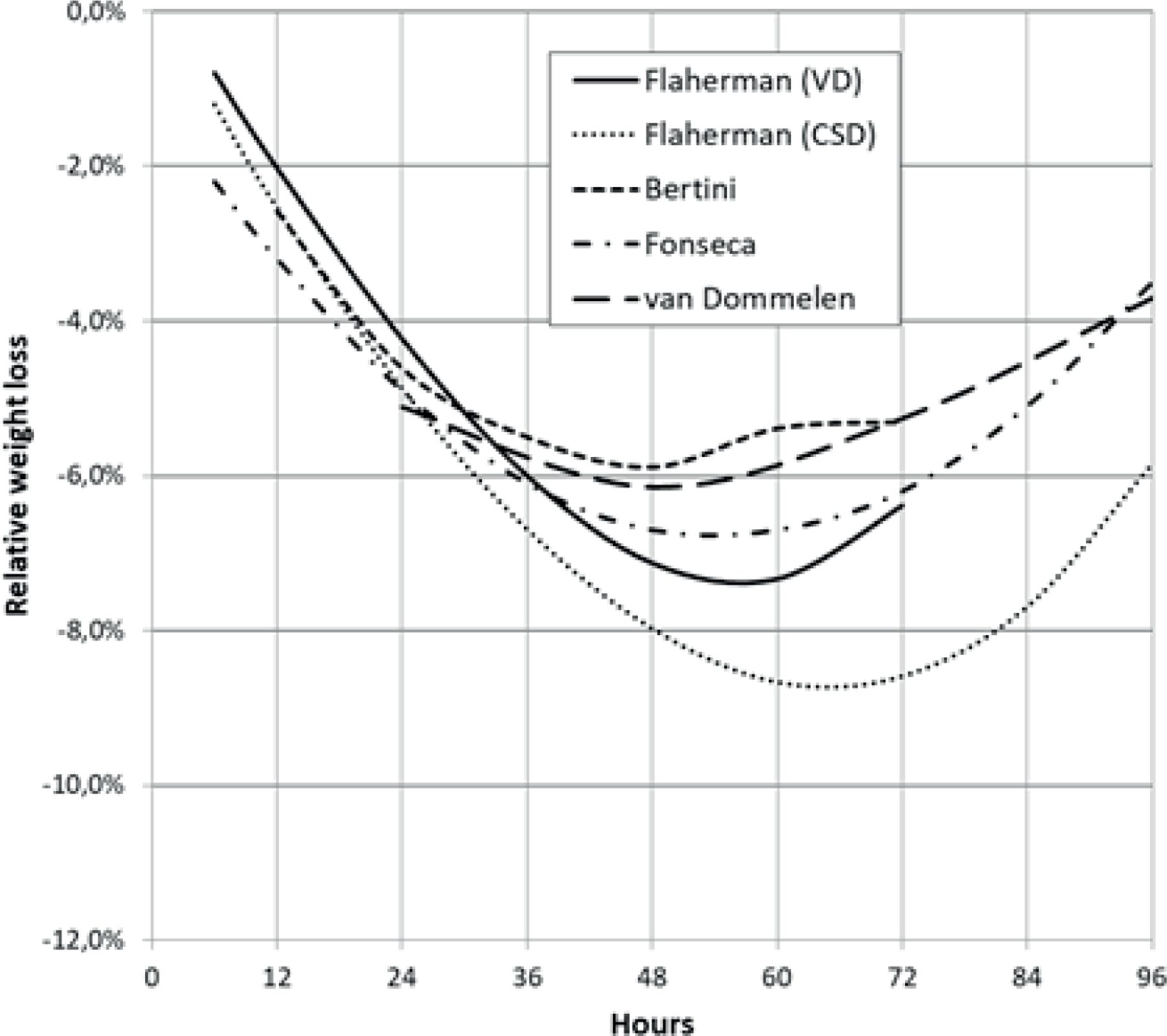 Nomograms developed by different studies point up some of the factors that support or interfere with breastfeeding initiation. Infants born in Baby-Friendly hospitals with limited birth interventions (Bertini et al., 2015; Pounds & Shostrom, 2018; Procaccini, Curley, & Goldman, 2018) had lower mean weight loss, whereas a Baby-Friendly hospital with many cesareans and instrumental births documented more excessive weight loss (Castilho, Miranda, Fernandes, Cunha, & Barroso, 2018). Infants born by cesarean section have a significantly higher weight loss and a delayed nadir (Fonseca, Severo, Barros, & Santos, 2014; Flaherman et al., 2015) compared with those born in institutions with low or null cesarean rates (Crossland et al., 2008; Bertini et al., 2015). The difference in cesarean rates explains some of the variance in median weight loss in Figure 1: The cesarean rate in Fonseca et al. (2014) was 29%, as contrasted with 0% in Bertini’s cohort, and 10% in van Dommelen’s. Mothers over 40 had about 2.4 times the risk of their infant losing excessive weight (Fonseca et al., 2014).

Results of the European cohorts reveal similar median weight loss (Bertini 5.9%, van Dommelen 6.2%, Fonseca 6.7%), in contrast to the value found by Flaherman et al. (2015) for vaginal deliveries in the United States (7.4%), reflecting cultural differences in labor and postpartum practices. Indeed, a U.S. Centers for Disease Control report concluded that “Most U.S. hospitals have policies and practices that do not conform to international recommendations for best practices in maternity care and interfere with mothers' abilities to breastfeed.” (Centers for Disease Control and Prevention [CDC], 2011). Epidural analgesia during labor was associated with increased newborn weight loss in a Canadian multihospital chart audit (Martens & Romphf, 2007).

Japanese women who initiated breastfeeding in the first 2 hours were more likely to be still breastfeeding at 4 months (Nakao, Moji, Honda, & Oishi, 2008). Infants also lost more weight in the summer (Davanzo et al., 2013; Jain & Basu, 2010; Shah & Javadekar, 2018). With so many variables, it is unsurprising that a systematic review by Thulier (2017) found insufficient research to pin down normal weight loss in breastfed infants.

Differences in weight loss by population decrease markedly at the low end of the dataset (Figure 2). The 90th percentile of weight loss was unavailable for van Dommelen’s data, as it was expressed in z scores in their study. The striking difference is that in Bertini’s study no infant lost 10% or more of birthweight, and the 90th percentile nadir is 8%; while the other studies all exceed 10%. Births at the Centro Nascita Margherita are restricted to low-risk mothers and infants, births are all vaginal and unmedicated, conditions that according to the authors create a normative “standard” (Bertini et al., 2015). 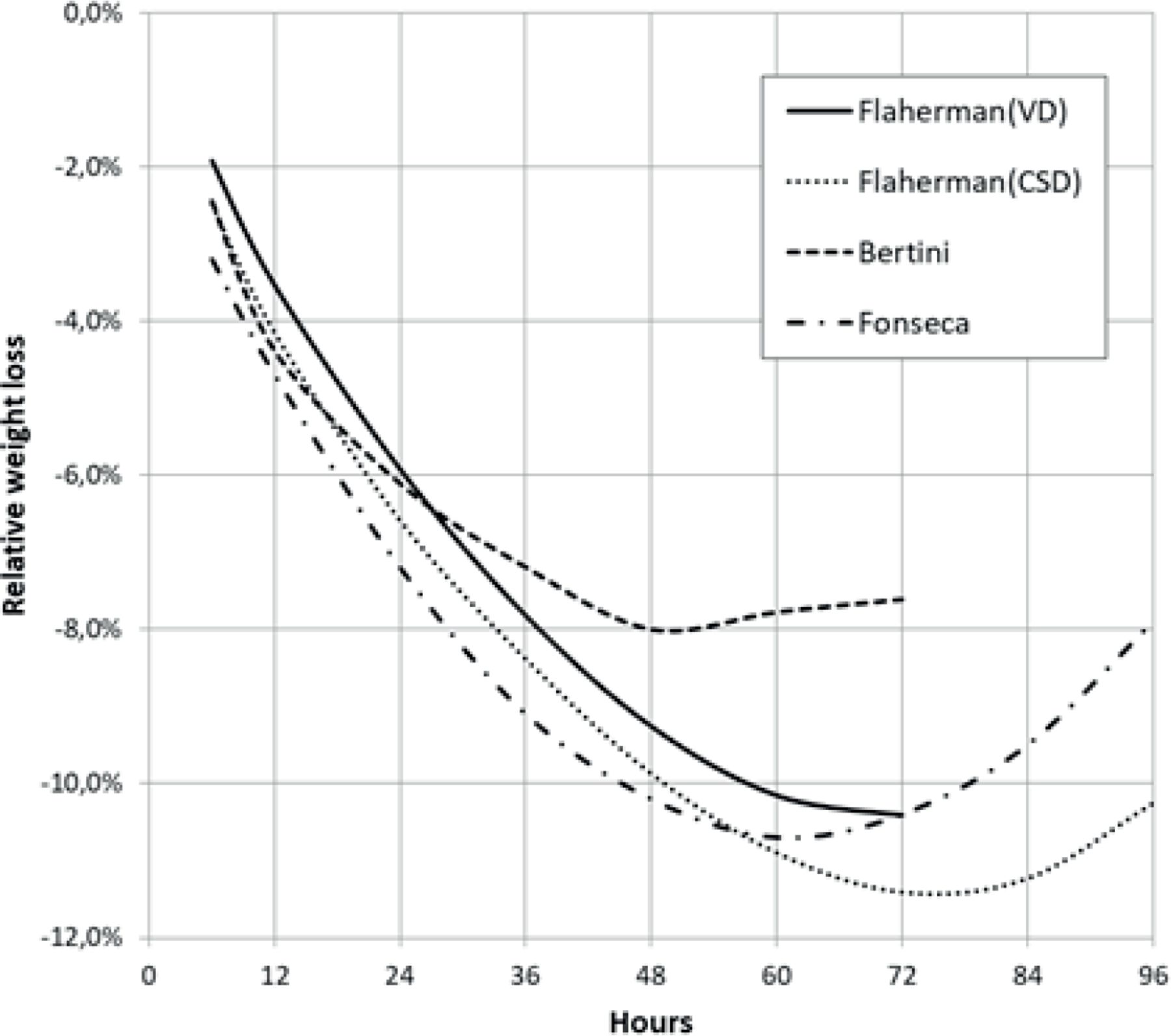 van Dommelen et al. (2007) found no cases of hypernatremic dehydration before day 3. Their data revealed that a 10% weight loss in the first week of life provided too many false negatives, whereas losing more than 2.5 standard deviations on their normal growth curve identified all infants at risk. Infants remaining 10% below birth weight after 1 week were at high risk and should be hospitalized for biochemical tests and rehydration. Rapid rehydration during hypernatremic dehydration causes cerebral edema and increases the chance of poor outcomes (Boskabadi et al., 2017; Laing & Wong, 2002; Lavagno et al., 2016). Continued provision of expressed breast milk (and breastfeeding, if the infant is able) is appropriate during rehydration. Previous concerns about sodium exposure from breast milk have proven unfounded when infants receive sufficient fluid volume (Laing & Wong, 2002; Oddie, Richmond, & Coulthard, 2001).

Symptoms of dehydration or low breast milk intake should not be ignored at any age. Stool output in the first 5 days was negatively associated with weight loss in normal newborns (Shrago, Reifsnider, & Insel, 2006). Differences in stooling patterns was not significantly different until after day 2 in infants later diagnosed with hypernatremic dehydration (DiTomasso & Paiva, 2018; Thulier, 2017), by which time many U.S. infants are discharged. Fewer than three daily stools was almost universal before readmission for hypernatremic dehydration in an Indian retrospective review (Yaseen, Salem, & Darwich, 2004).

Mothers and health-care providers need to understand the importance of normal stooling patterns in young breastfed infants (Livingstone, Willis, Abdel-Wareth, Thiessen, & Lockitch, 2000). Health-care professional education is particularly important in cultures where breastfeeding rates have previously been low and mothers have little breastfeeding knowledge. First-time mothers, and those with low breastfeeding exposure and education, are consistently identified as more likely to experience unrecognized lactation failure. A comprehensive list of risk factors for hypernatremic dehydration appears in a systematic review by Lavagno and colleagues (Lavagno et al., 2016).

Signs of dehydration may be subtle in hypernatremic dehydration, as fluid is shifted to extracellular compartment by osmotic pressure from the elevated sodium (Neifert, 2001). Dry mucous membranes and/or fever were early signs of hypernatremic dehydration in a recent retrospective review (Ünver Korğalı, Cihan, Oğuzalp, Şahinbaş, & Ekici, 2017); lethargy or hypotension in another (Konetzny et al., 2009). Irritability or inconsolable crying with constant ineffective feeding attempts should also be investigated with a high index of suspicion.

Takahashi and colleagues found that infants with excessive weight loss showed increased rooting intensity (Takahashi, Takahashi et al., 2015). An increased number of feedings with excessive weight loss is a marker for lactation failure “perhaps as an expression of thirst” (Marchini & Stock, 1997). As the infant decompensates, the number of feeds may sharply decrease (Boskabadi et al., 2017). Jaundice is also common in underfed infants, starvation increases re-uptake of bilirubin through the enterohepatic circulation. In one retrospective review, 49% of hypernatremic infants were also jaundiced, and 65% had cesarean births (Uras, Karadag, Dogan, Tonbul, & Tatli, 2007).

Immediate or early skin-to-skin care is one evidence-based support for breastfeeding. A non-randomized trial showed that 120 minutes of skin-to-skin (S2S) contact initiated within 30 minutes of birth (vaginal, cesarean, or instrumental) was associated with about a five-fold greater odds of exclusive breastfeeding at 3 months versus no early skin-to-skin contact (Vila-Candel, Duke, Soriano-Vidal, & Castro-Sánchez, 2018). Since low milk production or low infant weight gain were the most common reasons women gave for discontinuing breastfeeding before 3 months, and almost 60% of S2S dyads were still exclusively breastfeeding, it is probable that early, uninterrupted skin-to-skin care can reduce excessive newborn weight loss as well.

The data we found on infant weight changes highlighted the impact of perinatal practices including birth interventions and postpartum breastfeeding management. This is an obvious area for quality improvement in the Joint Commission perinatal core measure set.

We propose early assessment by IBCLCs of all dyads with higher than expected weight loss in the first 24 hours to ensure infant safety. If any signs of inadequate milk transfer or production are observed, manual expression and spoon feeding of colostrum can protect both maternal milk production and the infant’s metabolic health. Other potential interventions flow from the findings of a thorough clinical breastfeeding assessment (Genna & Sandora, 2016). We have provided a decision tree (see Appendix) to aid in these assessments.

b Nadir data for Flaherman et al. (2015) are taken from the percentile charts.