Incidence and Prevalence of Tongue-Tie

What is the prevalence of tongue-tie (the proportion of total cases in a population)? Is the incidence (occurrence of new cases) increasing or are clinicians simply identifying it more often? The most reliable way to estimate incidence and prevalence is through population-based epidemiological studies. So far, these are limited. However, there has been some research that allows us to approximate rates. Our expert panel offers their judgment on two questions: What is the approximate percentage of babies with tongue-tie? And is incidence increasing?

The Percentage of Infants With Tongue-Tie

The exact prevalence of tongue-tie is unknown. According to the current body of evidence, prevalence rates range from 0.1% to 10%, clustering around 3.5%–5%, depending on the criteria used to evaluate the lingual frenum in a particular study. The highest and lowest numbers occur when visual criteria dominate the assessment process, for example, lowest percentage when using thick visible frenum on lift (Sedano, 1975) and highest percentage when using the Hogan-Westcott-Griffiths classification schema (Hogan, Westcott, & Griffiths, 2005). This variability suggests that the assessment processes in these two studies was nonspecific in the former (false negatives) and nonsensitive in the latter (false positives).

Prevalence testing was only undertaken relatively recently when David Todd, an Australian neonatologist, mounted a 3-year study that screened every baby born in his facility using a standardized assessment tool. In a sample size of 9,478 babies, he found that an average of 4.83% of babies per year were tongue-tied requiring surgery. Another 5% had signs but were able to normalize function with management alone. According to the definition of true tongue-tie, this amounts to a prevalence statistic of about 5%. Furthermore, 70% of the truly tongue-tied babies had a ventral tongue frenum attachment in front of the body-blade juncture (anterior tie), and only 30% had a ventral tongue attachment behind the body-blade juncture (posterior tie; Todd, 2014; Todd & Hogan, 2015).

It varies from <1% to 10%, depending on the study population and criteria used to define it. To determine the incidence of any condition, it is requisite that it is previously defined, and that there is a consensus so that the condition can be identified and reported by every healthcare professional. This is not the case with ankyloglossia. Although there is a morphological definition (a congenital anomaly in which a short, lingual frenulum restricts tongue movement), there is no consensus as to its different types and its clinical impact, and therefore, it is not homogeneously reported. It is therefore difficult to be sure whether its incidence is increasing or rather the awareness of its impact in the breastfeeding dyad is increasing (González Jiménez et al., 2014; Hall & Renfrew, 2005; Mueller & Callanan, 2007; Segal, Stephenson, Dawes, & Feldman, 2007).

I exclusively see infants having breastfeeding difficulties, so it’s unsurprising that I see a higher incidence of tongue-tie than that reported in the literature, which ranges from 3.5% to 13%. We would need good studies using the same well-standardized assessment on similar populations a decade or two apart to determine if the incidence is increasing. This would be particularly difficult because we don’t know what we don’t know yet.

Although at a teaching hospital with 325 births per month, I saw 15% of the newborns each month for release of tongue-ties and still had lots of complaints that other newborns could not get an appointment with me to release a tongue-tie. I estimate the true incidence of tongue-movement restriction that would benefit by surgical release to be roughly 20%–25%. This would include all such movement restrictions regardless of what “type” it is felt to be. I was fairly selective about which restrictions I would release when I started doing this in 2003. Some of the infants whom I elected not to release came back later with more significant clinical symptoms, which resolved when I then agreed to release the restriction. Thus, I gradually included more and more of those who I previously felt were too “mild” to release. I now know that if there is at least a small, midline mouth floor “speed bump” detected by a little finger sweep from side to side, and the usual clinical symptoms of tongue-tie are present, this constitutes a restriction that should be released.

The concept of mild, moderate, and severe tongue-ties based on visual appearance is false. The condition must be assessed on the severity of interference with normal breastfeeding. Some questions include the following: Is mom’s milk production increasing to the level needed to meet the caloric needs of the infant(s)? Is a nursing session less than 40 minutes in duration and satisfies the infant(s) for at least 2–3 hours? Is the latch comfortable for mom and not damaging to mom’s breast tissues? Is the infant(s) able to transfer milk efficiently and gaining weight as expected? As we consider all of these factors, and not just the appearance of the tongue and mouth floor, we likely are including more infants in the category of clinically significant tongue-tie, and thus, the “incidence” of tongue-tie is likely enlarging in parallel with our understanding of what constitutes a tongue-tie.

An example of a video providing general information on tongue-tie for mothers. 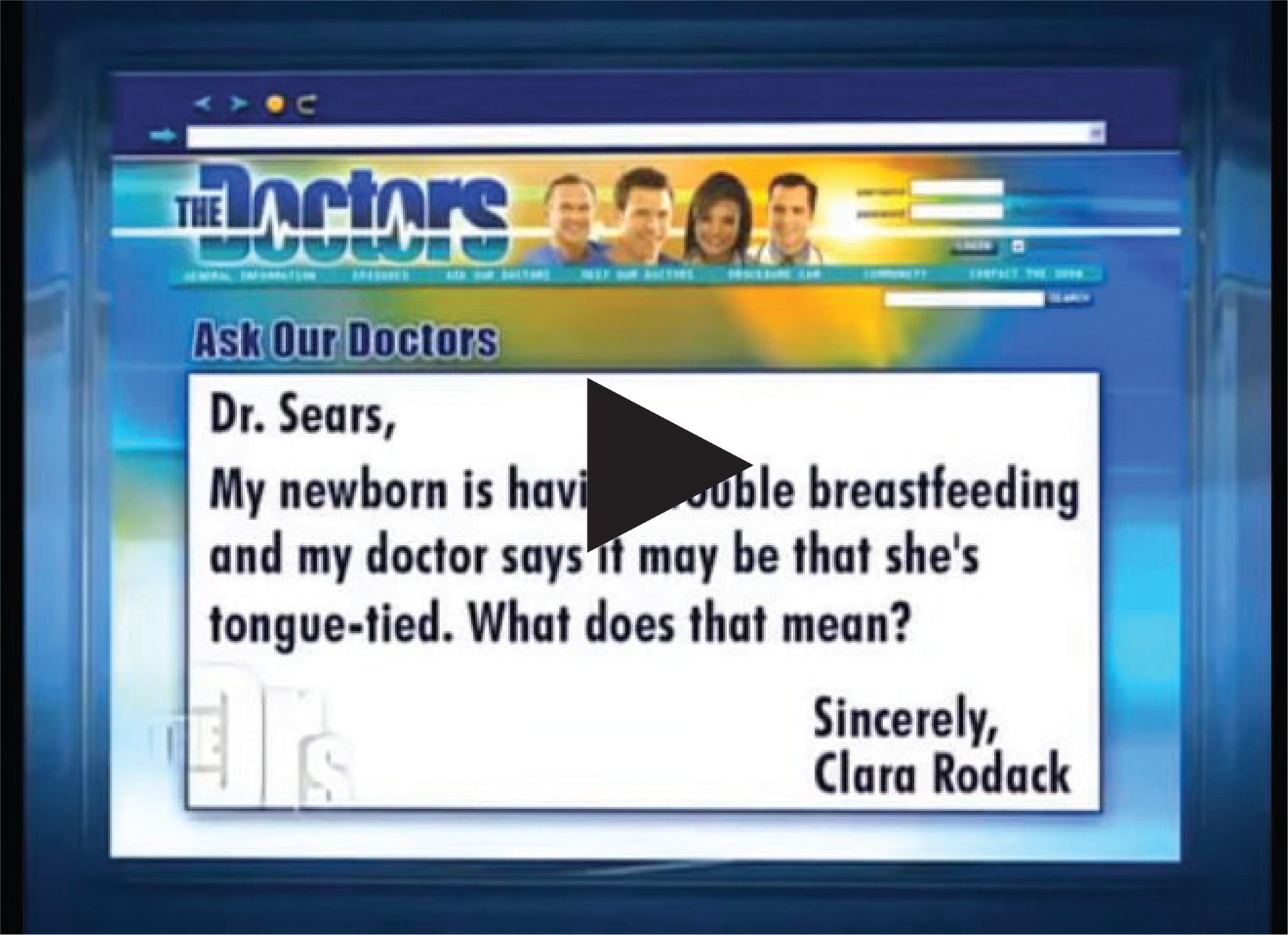 Currently, the most consistent ranges that I encounter are from 1.7% to 12% of the examined general population, but can be as high as 25% in infants with breastfeeding problems. This answer is based on the various publications, texts, and educational workshops that I have attended. However, I do believe there have not been consistent standardized reproducible evaluator guidelines for these numbers, so they are highly variable.

Historically, I was one of the few pediatric dentists in the 1970s to learn the basic bladed frenotomy procedure as a clinical chief resident during my pediatric dental training at a major hospital in New York City. The guidelines for treatment were very subjective. Simply put, if you could not speak well or if there was a big gap between the teeth after orthodontic treatment, then a surgical revision was necessary. At no time were babies and toddlers ever considered for evaluation. If there was any major tongue surgery for a release, this was under the pervue of either ear, nose, and throat (ENT) or oral surgery to perform an involved Z-plasty. So, the standards that I was trained by are based on older guidelines and are not based on current standards for identifying frenum restrictions that we are discussing in this forum.

From the 1950s, classic (or anterior) tongue-tie (CTT) was often overlooked as a cause of breastfeeding problems. In a literature review in 2005, Hall and Renfrew acknowledged that the true prevalence of ankyloglossia remained unknown, although they estimated 3%–4% of newborns.

After 2005, once the diagnosis of posterior tongue-tie (PTT) had been introduced (Coryllos, Watson Genna, & Salloum, 2004), attempts to quantify incidence have remained of very poor quality, but estimates currently rest at between 4% and 10% (National Health and Medical Research Council, 2012).

The problem is that there is a lack of definitional clarity concerning the diagnosis of PTT, and CTT is now often conflated with PTT as simply “tongue-tie” (TT). Between 2004 and 2013, the incidence of TT diagnosis in Canada increased by 70%; the rate of frenotomy increased by 90% (Joseph et al., 2016). In Australia, emerging epidemiological data shows an exponential rise in the incidence of Medicare-funded frenotomies since 2008, and this data does not even consider laser surgery by dentists, who perhaps perform most frenotomies (Joseph et al., 2016; Kapoor, 2017; Wattis, Kam, & Douglas, 2017).

Fortunately, CTTs are now much less likely to be overlooked! But this kind of pattern is recognized by epidemiologists as typical of overtreatment.

The absence of baseline data telling us about the normal spectrum of newborn oral connective tissue variation underscores how matters related to clinical breastfeeding support are still not a health system or research priority. In fact, I’d argue that this lack of investment is the actual story that underlies the oral ties controversy.

There are several definitions of tongue-tie as well several assessment tools reported in the literature. That fact makes the calculation of incidence rates more difficult as each professional or health center has different assessing criteria. For knowing the real incidence of tongue-tie, there should be standardization of tongue-tie definitions and standardization of validated protocols. In Brazil, lingual frenulum protocols have been validated to provide standardized assessment criteria and consequently provide more accurate incidence data.

Is Incidence of Tongue-Tie Increasing?

I do not have evidence to quote that the incidence is either higher or lower. I think we have just not given the proper attention in an intake health questionnaire or physical examination, and therefore, we have not diagnosed accurately. If I were not educated in the evaluation of these frenum-related issues, I would have continued to assume the numbers of treatment necessary cases over the past 10+ years would be the same low numbers that I saw over my career prior to that.

I now see hundreds of babies for necessary treatment for restrictive frenum. So, the incidence to me suddenly went from zero babies to hundreds a year. Was this a sudden developmental crisis or infectious disease-like epidemic, or was this there all along and I just was not aware of its existence?

I do find that I have been treating an almost unending stream of patients, from newborns to mature adults, who all have tongue-tie issues that were unrecognized for the entirely of their life. Based on the number of the referrals to my practice, you would think that over 90% of the referred population has a tongue-tie.

We absolutely must reexamine the way we presently identify tongue and also lip frenum and how it impacts the apparent increase in numbers of treated cases we are presently seeing clinically and reading about on social media. There essentially never was any contact with any breastfeeding-related problems or how to work with an IBCLC. The current IBCLC and social-media infant referrals are coming to me because they have exhausted the simple fixes that help with breastfeeding using position adjustment for baby and nipple, nipple shields, accessory feeders, and elimination diets for the mother because of reflux symptoms, and oral and nasal infant leakage. These compensations were no longer sustainable and thus the increased referral base.

This should be a simple question, but it is not because definitions of tongue-tie vary so much. Based on my clinical experience over the past 21 years in an exclusively breastfeeding-medicine tertiary practice, I do not believe the incidence is increasing. I do believe our professional sensitivity to looking for restricted functional lingual mobility has increased, but I don’t have any evidence that this means there has been any true change in the epidemiology of this issue within the infant population. Because I’m in a tertiary setting, I don’t have a good basic denominator on which to judge my numerator. I have seen referrals to evaluate for posterior tongue-tie increase over the past decade, but a good chunk of these are babies who are having the same variety of breastfeeding problems I have always seen, who also happen to have the same posterior frenulum that 95% of the population has but with no actual restricted lingual function. Not that the posterior oral tissues can’t be restrictive. They certainly can, but the recent increased “diagnosis” of “posterior tongue-tie” may reflect an increased enthusiasm for the diagnosis more than an increased incidence of actual restricted function.

The National Center for Health Statistics at the Centers for Disease Control and Prevention has released an updated Infant Mortality Data Brief. This report examines the 2014 linked birth/infant death data from the National Vital Statistics System to describe trends in infant mortality in the United States by race and Hispanic origin, state, and leading causes of infant deaths from 2005 through 2014. Over the past decade, the overall infant mortality rate in the United States has improved, declining 15% from 6.86 infant deaths per 1,000 live births in 2005, a recent high, to 5.82 in 2014. https://www.cdc.gov/nchs/products/databriefs/db279.htm

Keywords for this article